Recently I experienced some problems with my car of 9 years, was really loud at the rear seat when I drive. So I decided to bring my car for repair. I checked the repair workshops in Singapore and found out the problems causing the car to behave like it were the bearings at the back of the wheels.

It would cost me easily $300 to change the bearings and I was reluctant to change as I would be scraping the car in 3 months’ time. I did not want to spend so much on the car anymore since it will just get scrapped at the end of the day.

I then went online to find reviews or blogs that recommend car workshops in JB. Found this repair workshop that someone recommended to be trustworthy and reliable. 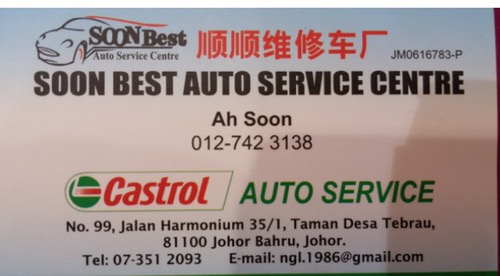 I decided to whatsapp Ah Soon and check the prices. To change the bearings, it would cost me RM440, which was around S$150. That was a no brainer. I believe many people go in there to repair their cars for the fact that it is much cheaper and can already cover the costs of travelling in.

It took 2 hours to change the bearings and I took a Grab car to the nearby Aeon Tebrau which cost me RM4. I like the boss Ah Soon as he is kind and honest. I don’t really know if I have been charged higher as compared to a local, but I can easily accept the price that I was charged, not having to think if he has cheated me or not.

Do get your cars done by him if you are looking for someone reliable.